By Randy A. Bergum

The Orange County Theatre Organ Society (OCTOS) recently received a donated set of tuned Wurlitzer Sleigh Bells for use in the Plummer Auditorium Wurlitzer. This Sleigh Bell action has a compass of 25 notes, and is a delightful addition to the existing organ.

The set of bells had been removed from the leather mounting straps at one point, and then reinstalled in an “almost right” configuration. Upon inspection, it seemed that the set had been mixed up with another, as some notes were missing, and others had multiple bells for each position based on pitch.

The individual bells are known as crotals, and this set are cast brass, each one containing a small metal ball inside that jangles around inside when shaken. A slot in the top half of the crotal forms opposing “ears” which vibrate, producing the familiar sleigh bell sound.

I used a die grinder (“The CrotalMaster 3000”) as shown in Fig. 1 with an abrasive disc mounted in an arbor for metal removal. 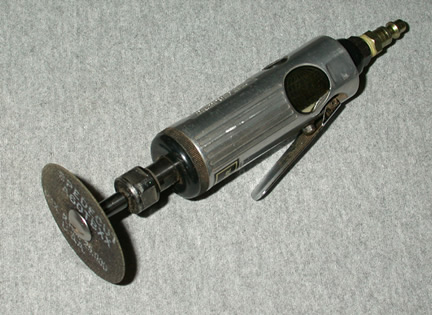 Tuning exactly is not desired - try to get close to pitch, leaving some slightly over and some under, and you will get a chorus effect.

There were four crotals that were too low to raise the pitch on, and in desperation, I tried a trick learned years ago in welding chime tubes. A small amount of silicon-bronze filler rod was TIG welded at the bottom of the slot to shorten it. This had the effect of raising the pitch about three whole notes! After welding , the excess filler was ground down to match the cast surface, and the tone did not change. Both sides of the slot were evenly reground deeper in slow steps until the pitch was correct. No cracking of the cast crotal was observed, most likely because the size is small enough to allow even expansion of the surrounding metal during welding.

The amount of metal to remove for raising a pitch as opposed to lowering is very different - about 20:1. It takes a lot of grinding to raise the pitch, but a tiny amount to lower it. If you have a choice, start with a sharp crotal and flatten it down.

A sample of one of the many crotals that were tuned is shown in Fig 2. 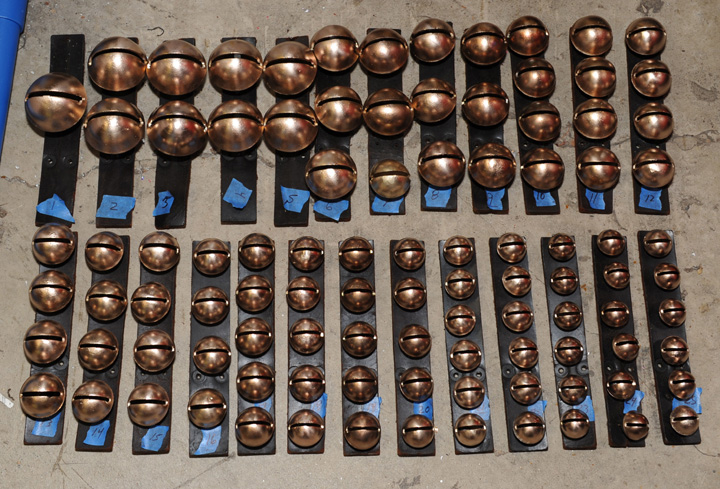 All crotals were successfully tuned with minimum distress, and the Sleigh Bell action now resides above the proscenium at Plummer Auditorium.

Many thanks to Bob Trousdale and Al Sefl for their help in preparing this article.

(Randy’s World Headquarters are based in Fullerton, CA. His hobbies include collecting coins found on the ground, Mosh Pit Diving, and Water Cannon warfare)

Copyright © September 1997 and beyond by Randy A. Bergum All Rights Reserved